Is there a FROGS Guidelines or standard procedure?

FROGS' design is highly modular and so allows users to choose their tools and processing order. However, default values are advised when possible, and a standard procedure for amplicon analysis should follow these steps:

What data are processed by FROGS?

FROGS is designed for the study of microbial communities from amplicon sequencing. The amplified area is chosen to be as distinctive as possible in the community you are interested in. For example, researchers favour 16S ribosomal RNA part when studying the bacterial composition of an environment.

However, FROGS can be used on any amplicon as long as the area of interest respects the constraints mentioned below:

In standard protocol, target DNA must be completely sequenced in the reads i.e. either a single-end reads starting from 5’ primer and finishing to the end of the 3’ primer or in paired-end case the forward and reverse reads must be overlapped.


What primers can I used for my amplicons ?

Exemples for Fungi and other amplicons:

How to use FROGS to analyse ITS reads ?

ITS reads can have non-overlapping reads. Merging tool as VSEARCH cannot merge these reads and they are lost by the system (two reads will be merged if they overlap at least on 10 bases). So, to keep these reads we created an option on Preprocess Tool, activated in replying "Yes" to "Would you like to keep unmerged reads?"
These sequenced are tagged combined sequences. 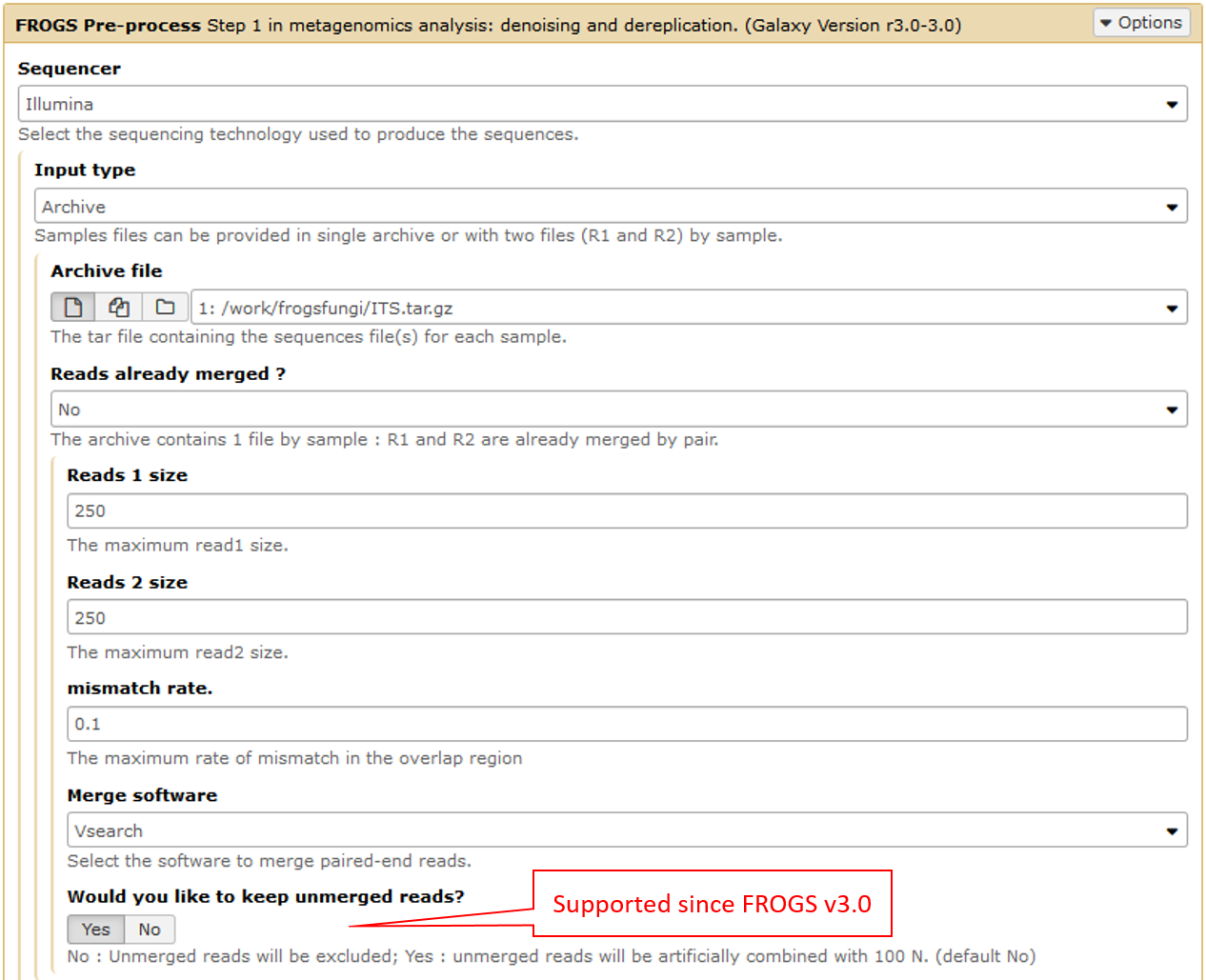 Carreful, this option have to be activated only if reads are longer than target sequence. Otherwise, you will keep noise in your analyses. the "un-merged" will be "combined" sequences.


Difference between "overlapped" and "combined" sequences: 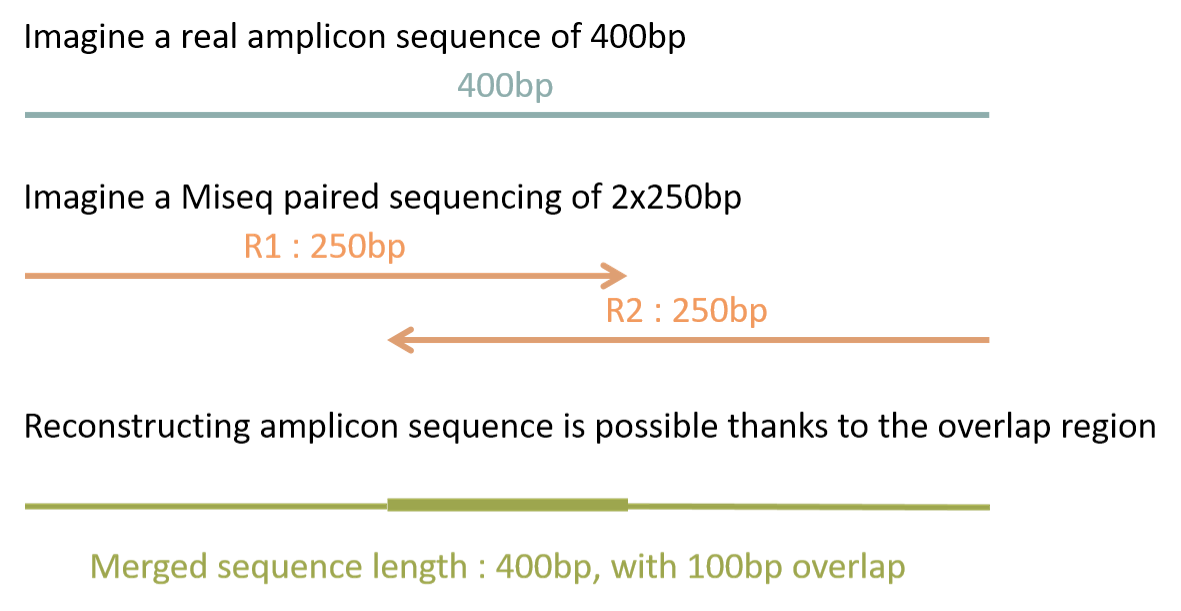 Imagine a MiSeq sequencing of 2x250pb with reads impossible to overlap. So FROGS "combined" length = 600 bp.

What is the purpose of the ITSx tool? 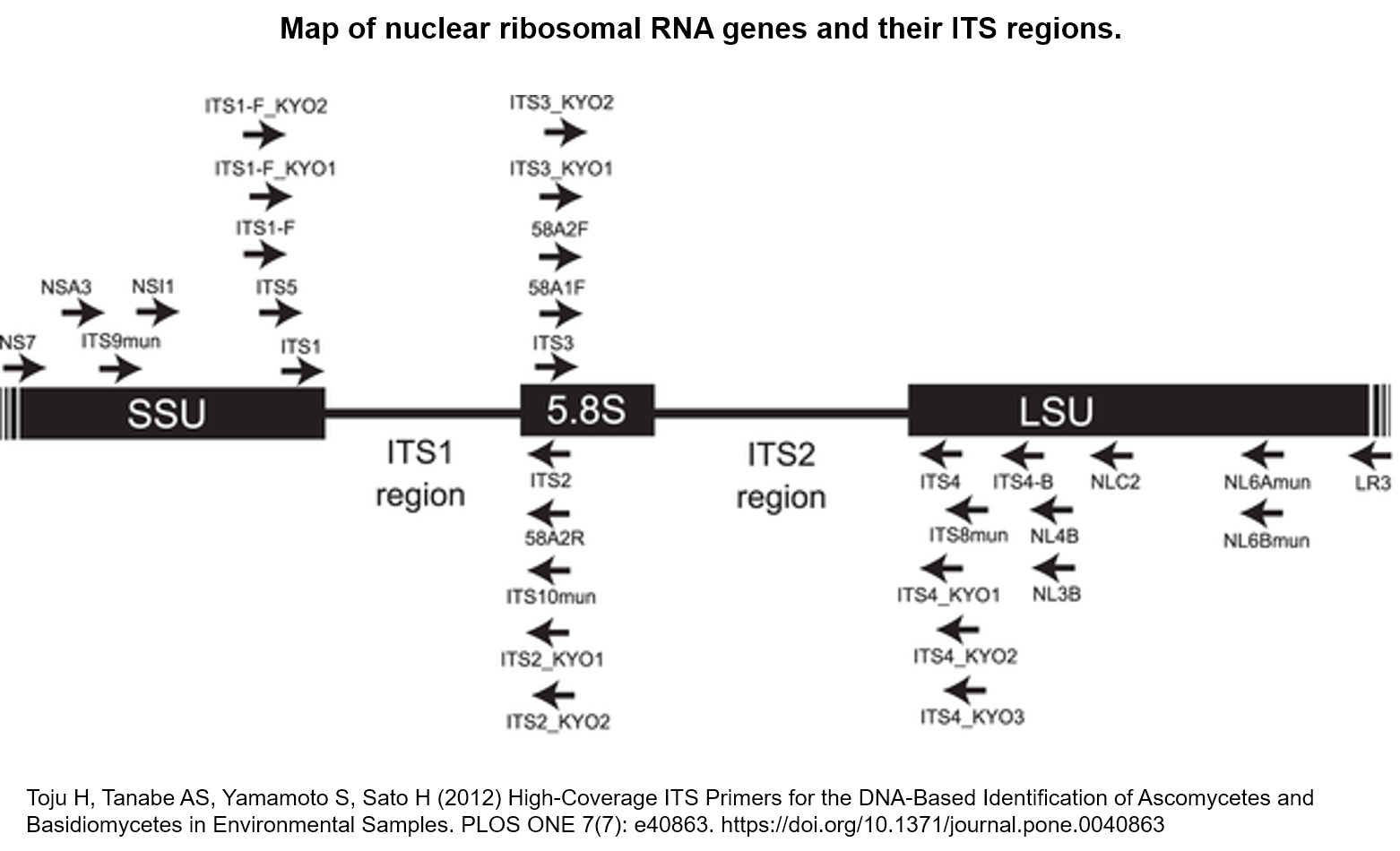 It is interesting to keep only the ITS parts without the flanking sequences in case one would like to compare sequenced amplicons with different primers targeting the same region to be amplified. You can choose this option on configuration panel of ITSx Tool. Reply "No" to question "Check only if sequence is detected as ITS?". In opposite, if "Yes" is chosen, sequences with ITS signature will be kept without trimming SSU, LSU or 5.8S regions.

Carreful, The ITSx step is time consumming and has to be done on clusters. We advise our users to apply ITSx in 5th step:
Carreful, ITSx is currently usable for the detection of fungi ITS (neither plants nor other eukaryotes).

What is special about the affiliation of ITS (with combined sequences more broadly)?

blastn+ or needleall is used to find alignment between each OTU and the database. Only the bests hits with the same score are reported. blastn+ is used for merged read pair, and needall is used for artificially combined sequence. For each alignment returned, several metrics are computed: identity percentage, coverage percentage, and alignment length. If "combined" sequences are stayed presents in OTUs, blastn+ is not usable as for classical merged sequences. So, sequences are affiliated in 3 steps:

Carreful, with "combined" sequences, we introduced some modification on identity percentage

This calculation allows the 100% identity score to be returned on FROGS "combined" shorter or longer than reality in case of perfect sequencing. And returns a lower percentage of identity in the case of repeated small overlaps kept in the FROGS "combined".

What is the purpose of the Affiliation post-process tool (since FROGS v3.0)?

This tool allows grouping OTUs together in accordance with the %id and %cov chosen by the user and according to the following criteria:

In consequence: In case of ITS amplicon analyses, you may have ambiguities due to inclusive ITS sequence coming from different species. In this case you may precise which ITS 1 or 2 you analyse, and the tool will keep affiliation of the shortest sequence in case of multi-affilition tag. This "Affiliation post-process" tool helps to resolve ambiguities due to potentially inclusive sequences such as ITS. 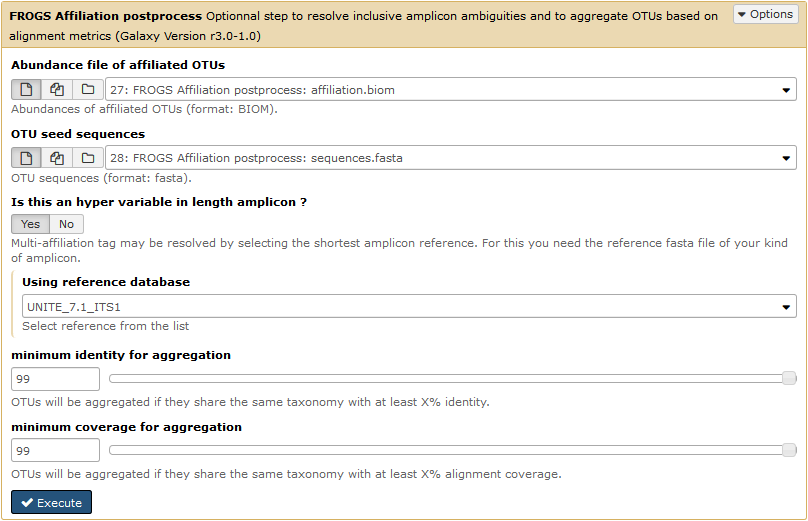 What filters should I use in FROGS-Filters?

FROGS proposes various filters to meet users'needs, but depending on your data and scientific question, only a part of them should be used. The most used filters are the OTU filters based on samples and abundances.

How to fill the 5’ and 3’ primers fields in FROGS-Preprocess tool?

The most frequent error encountered by FROGS new users is a wrong completion of their 5’ and 3’ primers. Make sure that you followed the instructions available at the bottom of the tool: primers should be provided as they are read on a 5’->3’ sequence. Generally, that means that your 3’ primers should be reverse-transcripted.

What is the “custom protocol” parameter in FROGS-Preprocess tool?

(Illumina data only) This custom protocol corresponds to Kozich et al. (2013) protocol, where PCR primers are also used as sequencing adaptors, and so PCR primers are not included in the obtained sequences. Thus, choose this parameter only if you used such a sequencing protocol, otherwise, select the standard protocol.

What is the “mismatch rate” parameter in FROGS-Preprocess tool?

(paired reads Illumina only) The mismatch rate corresponds to the mismatch rate allowed when pairing paired-end reads using Flash in the FROGS-Preprocess tool. A 0.1 rate means that 10% mismatches are allowed along the overlapping region. Sequences presenting more mismatches will be discarded.

What are the “minimum/maximum amplicon size” parameters in FROGS-Preprocess tool?

What is Swarm and how does it work?

How to work in a FROGS ambiance?